Liberty and Tiny Houses: A Patriots View of Alternative Living

This is a paper that I wrote for school about tiny houses.  I fully support tiny house living (also here, here, and here) in terms of financial freedom and individuality.  I do not support the eugenics based false environmental and artificial scarcity narrative that is driven by the United Nations in order to control the population.  My family and I are personally intending to live in multiple tiny homes equaling approximately 1000 square feet.  Let’s take back control of our lives and finances.  Let’s free ourselves from debt burden through hard work now.

Affordable housing is a critical issue in America.  The incredible debt burden of Americans (Snyder, 2012) as well as the negative savings rate (Hedge, 2014) of young Americans in particular requires a differing approach to housing.  The modern method of building big, cheap homes is no longer an effective strategy.  (Shafer, 2009) The average American’s home mortgage debt has increased 5 times in the last twenty years, (White, 2011) and the amount of American’s who have foreclosed on their homes has increased from approximately 1% to 4.5% from 2000 until 2010.  (Shilling, 2011)

The recent housing crisis has allowed for some recent correction in the markets.  (White, 2011) However, the debt remains high.  Between housing, increased food costs, vehicle expenses, credit cards, as well as general desires, 43% of all American’s spend more money than they make.  (Snyder, 2012)  Over a lifetime between school, car, mortgage, credit card, and other debt, the average American will spend over $600,000 in interest alone.  (Wesley, 2014) According to the Bureau of Labor Statistics, the average hourly wage was $24.57 in October of 2014.  Therefore, the average American must work approximately 11.67 years at 40 hours a week, 52 weeks a year, to pay off interest on debt alone.

When an individual’s income goes primarily to housing, food, and transportation costs, this individual loses the freedom to pursue personal desires.  Increased cost of living (Slavo, 2014) combined with the stagnation of wages (Durden, 2014) has caused many of these problems.  In terms of Maslow’s hierarchy of needs, working daily just to procure food and shelter, without much opportunity to save, leaves us squarely at the bottom of the pyramid fulfilling the physiological needs of the self.  (Maslow’s Hierarchy) (See Image 1)  The needs above this level include (in order from lowest to highest) safety, love/belonging, esteem, and self-actualization.  These higher levels are difficult to access unless the individual has decreased financial volatility.  For example, the safety level includes financial security that is unattainable with housing debt and volatile financial markets.

Affordable housing has become an important aspect of financial freedom.  Financial freedom leads to increased productivity and creativity.  This is critical to the individual as well as the nation.  A free nation may not remain free when the individuals of that nation are continually preoccupied with financial survival.  Private sector debt is the main driver of economic recession and depression.  (138 Years of Economic history shows that it is excessive private debt which causes depressions, 2012)  Greater numbers of individuals dropping out of the workforce (Blog, 2014) and record numbers of individuals on government welfare programs (Slavo, Shock Report: 70 Million People Would be Starving in the Streets Without Government Welfare Programsw, 2014) have caused strains on individual finances while bloating government finances.

The recent difficulties with the mortgage and housing industries, as well as the financial system in general, personal opinions, changes in family size, and a greater awareness of the fraudulent modern banking systems of the Federal Reserve (Griffin, 2002) have sparked an interest in tiny house and alternative living.  Tiny house living appears to be coming to the forefront of the American psyche.  The interest garnered amongst tiny house enthusiasts covers a broad array of potential buyers.  From single, first home purchasers to retirees looking to downgrade; the tiny house movement has become popularized.  (Shafer, 2009)

A tiny house is a house that is, well tiny.  The average tiny house ranges from about 100 sq. ft. to 200 sq. ft.  The typical American home today is approximately 2500 sq. ft. – 3000 sq. ft.  The average home size in 1950 was half of the current size.  Homebuilders in America have been increasing the size of homes regularly since the 1970’s and 1980’s.  The housing industry and the banks that were funding it, in order to create more profit per structure, largely fueled this expanse.  One inexpensive way to increase profit margin is by increasing square footage.  It is far more difficult to increase usability.  Homebuilders have also been using inferior products as compared to historical building construction.  (Shafer, 2009)

The legality of these homes have been challenged.  Many areas have minimum size standards intended to ensure adequate livability of the homeowner.  Local building codes enforce these standards.  Due to minimum housing standards, low-income individuals have found themselves priced out of affordable housing, which then forces that individual into undesirable living conditions.

The idea that house size over usability of a house dictates proper housing is an inaccuracy.  This inaccuracy has had detrimental effects on society.

The financial system may be entrenched, however our personal decisions are not.  Therefore, we may choose to decrease our dependency on easy credit by making financial decisions that do not require great financial debt.  Tiny house living decreases financial stress by replacing a major financial liability with an asset, increases livability and enjoyment, as well as allows the individual the freedom to live a life dictated by individual desires over a life dictated by debt.  (Shafer, 2009)

In my opinion tiny house living is about functionality, frugality, and liberty in place of a lifetime of debt bondage.  As in the self, the quality of a home rests upon its usefulness and honesty, not in its opulence.  A well designed home should enhance life.

Due to size restrictions mentioned above, the tiny house movement has created homes built upon a trailer.  Travel trailer construction standards concern themselves with maximum size, not minimum size.  (Shafer, 2009)  These homes are fully functional homes and are usually approximately 8.5 feet wide and anywhere from 12ft to 24ft in length.  Parking spaces or a backyard have been good options for living.  (Shafer, 2009)

These homes are only capable of being 13.5 feet tall (including trailer) and 8.5 feet wide due to road restrictions.  (Janzen, 2010)  If you would like a bigger home, you must get a road permit from the appropriate regulating body.  The inside height of these homes is limited by the trailer on which they stand which invariably takes up a foot or two underground.

Construction type is of the ordinary wood type.  These homes use stiffer and more load resistant materials in order to allow for the wind forces on the home.  OSB is often substituted by plywood.  The smaller size and the fact that many individuals are constructing their own tiny homes allows for the construction of the home to be higher quality while maintain a lower price.

Individuals choosing to build their own home are gaining tremendous value for their efforts.  These individuals are able to design their home directly to their needs, gaining invaluable lessons in building construction as well as the satisfaction of erecting a worthy home to live in.  Many individuals have constructed their homes in three months over the summer, while some individuals take upwards of a year or two to complete their homes.

The actual building process, while similar to traditional building construction, does have some differences.  The main difference is the trailer.  The trailer should have heavy-duty axles (5000-5200 lbs. each), no front guard, no top rail or side rails, no ramps, and no dovetail.  Additional steel flange along the sides may be helpful with the securing of the house foundation.  Once, you acquire your trailer you must remove all of the flooring from the trailer in order to install flashing.  This assists with keeping the home dry.  Once the trailer has been prepared, you level it in order to allow the next phases of construction.

At this time, the builder may begin building your subfloor as you would normally, with the addition of supports over the wheel wells if need be.  (Louche, 2014) Due to the smaller size, the tiny house may use 24” OC studs due to the smaller span of the roof.  Many individuals choose 16”OC studs in spite of this in order to increase the strength of the building.  With a small sized building, the cost differences should be negligible.  The framing of the home is completed the same as any typical home would be.  (Louche, 2014)

After the completion of the flooring and sides of the building, it is time to construct the roof of the building.  Tiny homes have many styles of roofs.  These styles include shed type, gable, and gambrel roofs in particular.  Many of these homes, especially in drier and warmer climates, have shed type roofs with a slight slope.  These roofs are simple to build and allow a significant amount of open space in the loft.  A gable roof is good when necessitated by weather conditions and a gambrel style roof, while more difficult to construct, allows the greatest amount of space in the loft area.  (Louche, 2014)  Metal roofs are the preferred roofing material for their ability to stand up to wind loads while driving down the road.

These homes typically have a loft or two as sleeping areas and storage, a kitchen, bathroom with stand up shower, and a great room.  Due to the size limitations of these homes, the floor plans have been carefully planned with many of the items in the home performing double duty.  (See images 2, 3, 4)  Often a table will double as a desk and a place to eat.  Some individuals have chosen to build seating into the structure itself with hideaway pullout seating that is capable of transforming into a guest bed.  The construction of these homes becomes extremely individualized and functional.  This may enhance enjoyment, functionality, and pride in the home.

Maslow’s hierarchy of needs begins with the physiological needs of the body.  We must all sleep, eat, breath, and drink.  An individual who must devote himself to the acquirement of these items is a slave to his body.  Historically, American’s understand the rule of law, division of labor, and wealth that the constitutional republic of the United States provides.  We have also benefitted from the free market system that Adam Smith discussed in The Wealth of Nations.  As of late, bankers, easy credit, and instant gratification have seduced us into a lifetime of debt.  If we are capable of downsizing or eliminating debt then we may become financially free.  Financial freedom allows the ability to move up Maslow’s chart from physiological to safety, then to love/belonging, esteem, and ultimately self-actualization.  Eliminating home debt may be one of the most important aspects of achieving self-actualization.

A smaller house may just be the place for the average American to reassert their financial freedom.  As a perpetually indebted society, the ability, desire, and completion of a tiny home is a revolutionary act.  The desire to spend extra time working now, constructing your home, downsizing your purchases, delaying gratification, in order to limit debt in the future will deliver huge financial benefits.  Through greater financial freedom, tiny house living may just allow for greater life, liberty, and the pursuit of happiness. 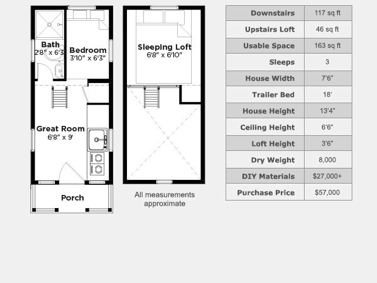 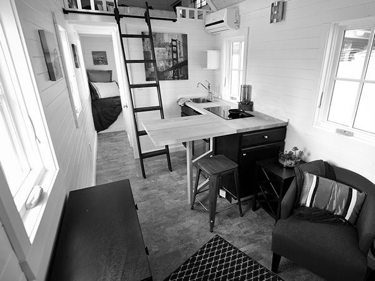